Including airport transfers, I have been in 37 different countries on 6 continents. Each country has unique features setting it apart from the others.

There are several countries where one visit was enough. Others merited multiple visits and a few of them hold a special place in my heart. Egypt ranks near the top of that list. I love going there. 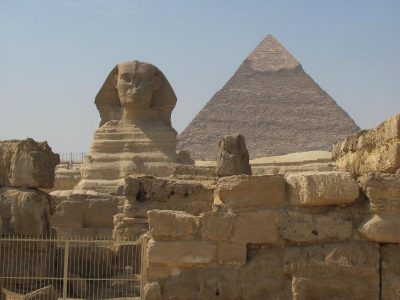 I’ve often wondered why Egypt intrigues me. Its ancient history and iconic sites are undoubtedly some of the reasons. Standing at the base of the Great Pyramid of Giza provides me a near out-of-body experience. Armed with a computer, the Internet, and power tools, I can’t build a doghouse. Without any modern tools Egyptians built that monumental structure over 4,500 years ago. The four sides of its 756 ft. base have an average error of just 2.28 inches. An estimated 2.3 million blocks ranging from 2.5 to 15 tons each fit perfectly in place next to and atop each other. Constructed over a 20-year period, workers would have needed to place nearly 13 blocks every hour of every day for 20 years. There is no reason to question its place among the Seven Wonders of the Ancient World.

My mind whirls when I consider the many Biblical accounts related to Egypt: Jacob, Joseph, Moses, Mount Sinai, the Pharaohs, the Passover, the Exodus, and the family of Jesus fleeing there from Bethlehem to escape the maniacal wrath of Herod. Did any of them step in the place where my foot just stepped? What did they see or touch that I just touched? Though now dominated by members of a religion far different than my own, this land remains a part of my Christian heritage.

Regardless of their religion, Egyptians exhibit hospitality like no other culture and food is a foundation. I have no idea what most of the food is called and would hesitate to say it. I have a long history of mispronouncing even the simplest words. A couple of years ago, some friends attempted to help me say, “I am fine, thank you!” in Arabic. I’m still not certain what happened but when I used the phrase people laughed hysterically. They claim I said, “I am a belly dancer.” Either the vision of me as a belly dancer or the odd word choice nearly sent them over the edge. It was probably the vision.

Christians are not in Egypt’s citizen-majority, and one of the consequences of being a minority in Egypt is marginalization; a politically correct word for discrimination. Even if it isn’t legal, it is commonly practiced. Christians are not typically found in upper-management positions and job vacancies are customarily filled by members of the majority religion. Salaries paid to Christians are often lower than those paid to someone else doing the same work. If a job requires menial work with low pay, there is a good chance it will be filled by a Christian. Housing may not be available to a Christian where another individual would not be turned away.

The Christians I know in Egypt are resourceful. I believe it is the blessing of the LORD that helps them stretch the little they have into enough. Many of the pastors we sponsored to attend a recent conference earn less than $200 per month and, just like us, have families to feed and churches to run. Some of them attend the conference at the lowest point in their lives and ministry. The time of fellowship and teaching we provide encourages them to return home and continue their work. They may not be rich, but they are wealthy in terms of their calling and purpose.

Christians in Egypt don’t all agree on everything. They are human and suffer the same temptations with ambition, jealousy, and greed as anyone else. I am reminded of the words of a Catholic bishop who spoke at our conference. “We are not each other’s enemy,” he said. “Satan would have you to believe that. Evil is our common enemy. We are meant to work with each other and love one another to defeat evil, not each other.” 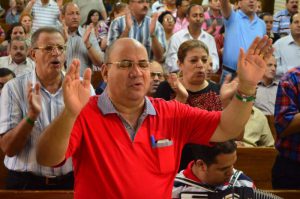 At the leadership conferences where I have participated, those attending love to worship. They don’t just sing, they go at it full-throttle. They clap their hands, women often sound out a high-pitched tongue trill (ululation) while others shout “Hallelujah,” and some will even dance. One song can last 10-15 minutes and is sung as robustly on the first note as it is in the middle and all the way to the final note. If there is a harmony part I never hear it because the melody is sung with such passion.

The theme of this year’s conference was “Authentic Leadership.” The models of church governance and leadership styles are changing all over the world. Our hope was to help the pastors and church leaders get in front of the change rather than be caught unaware on the backside of it. As best I can tell it was well received and was “a word in due season.” I’m so glad for the opportunity to speak and contribute.

So, why do I love visiting and ministering in Egypt?

Whether considering its past, present, or future, Egypt holds a special place in my heart. I’m so blessed to have played a small part in shaping the Church in Egypt and even more blessed for its influence upon me.

The Results Are In